JDA-801 and JAD-801 including power supply and USB cable 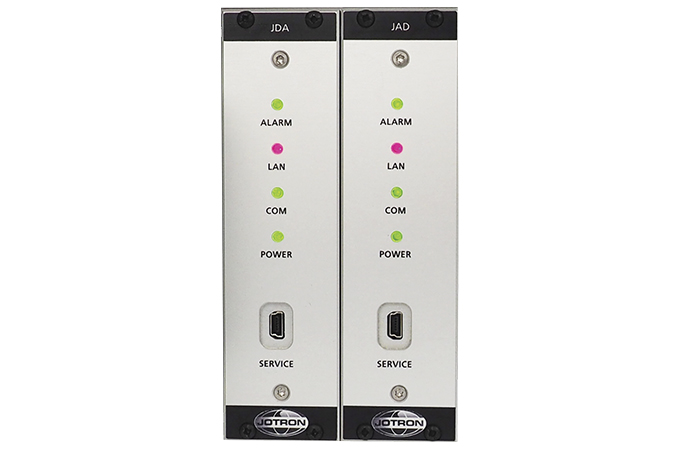 Jotron Digital to Analog Converter, JDA-801 and Jotron Analog to Digital Converter, JAD-801 are versatile tools for incorporating VoIP solutions in analog based receivers, transmitters and recorder systems. The units are 3U high and 12 units fits in a standard 19’ inch subrack. Both units use power over Ethernet (PoE) as the main power supply. They can also use one or two DC inputs (10-32V) as the main or backup supply.

Jotron Analog to Digital Converter
JAD-801 is a unit that converts up to 6 analog E&M inputs and switch these into 12 VoIP outputs. The format of the VoIP RTP streams complies with the RTP described in the current version of the ED-137 standard. The IP interface on the unit also complies with the SIP format described in the current version of ED-137 and fully support dynamic delay measurements used for voting as specified in version C of the standard.

Jotron Digital to Analog Converter
JDA-801 is a unit that converts up to 12 digital inputs into 6 analog outputs. The unit is fully compliant with the latest ED-137 standard with regards to SIP and RTP used to set up a radio connection. The unit supports PTT priority levels and/or mixing of input streams. The unit also fully supports dynamic delay measurements and delay compensation as specified in ED-137B/C.