The work being done by the Nigerian Airspace Management Agency typifies African efforts to improve airspace efficiency across the continent. African aviation is making solid progress. The continent’s airlines continue to improve safety, many countries have committed to a more collaborative environment and infrastructure at key African hubs is being shaped to handle future demand. 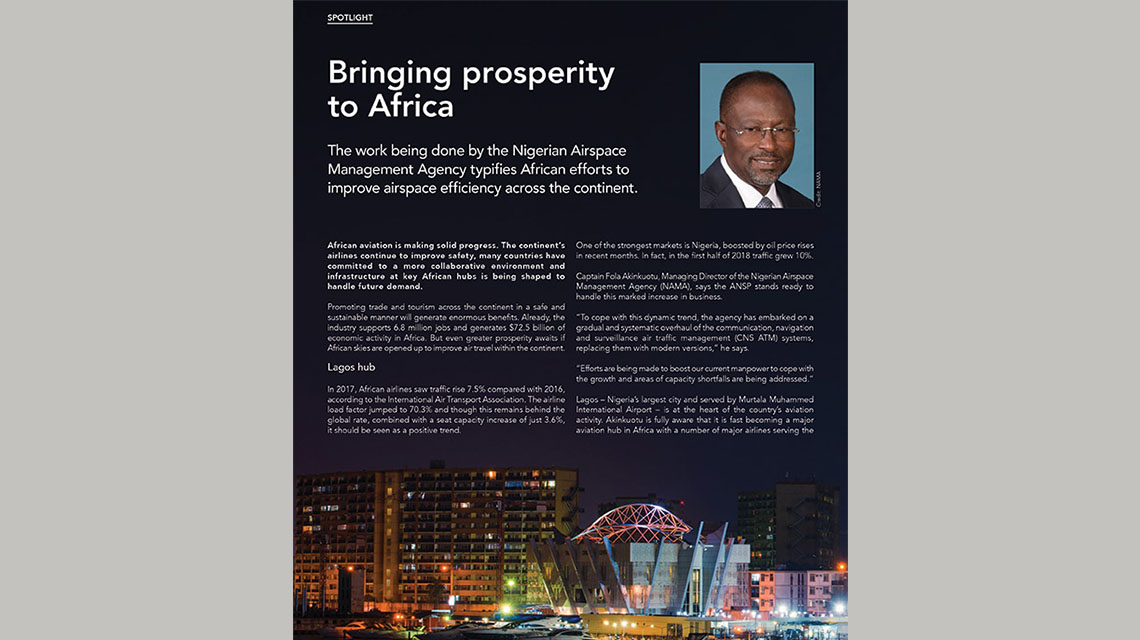 Promoting trade and tourism across the continent in a safe and sustainable manner will generate enormous benefits. Already, the industry supports 6.8 million jobs and generates $72.5 billion of economic activity in Africa. But even greater prosperity awaits if African skies are opened up to improve air travel within the continent.

In 2017, African airlines saw traffic rise 7.5% compared with 2016, according to the International Air Transport Association. The airline load factor jumped to 70.3% and though this remains behind the global rate, combined with a seat capacity increase of just 3.6%, it should be seen as a positive trend.
One of the strongest markets is Nigeria, boosted by oil price rises in recent months. In fact, in the first half of 2018 traffic grew 10%.

“To cope with this dynamic trend, the agency has embarked on a gradual and systematic overhaul of the communication, navigation and surveillance air traffic management (CNS ATM) systems, replacing them with modern versions,” he says.

“Efforts are being made to boost our current manpower to cope with the growth and areas of capacity shortfalls are being addressed.”

Lagos – Nigeria’s largest city and served by Murtala Muhammed International Airport – is at the heart of the country’s aviation activity. Akinkuotu is fully aware that it is fast becoming a major aviation hub in Africa with a number of major airlines serving the city, including the big three from the Gulf. This activity will doubtless be boosted by new national airline, Nigeria Air beginning operations at the end of the year.

Akinkuotu notes that the airport handles an average of 600,000 passengers monthly. To increase efficiency, NAMA has divided the Lagos sub-flight information region (FIR) into east and west sectors. This sectorisation will enhance airspace utilisation and increase capacity.

Link to article in AirspaceQ3